A few years ago, I adopted a “fear reactive dog” who I named Gypsy. 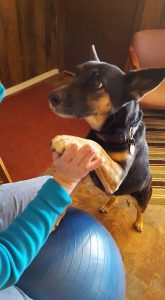 Gypsy had had several unhappy homes, which had left her with some behavioral problems, namely, she was aggressive with other dogs and was very afraid of people (though she was never aggressive with them).

A friend of mine recommended that I see Tamra, who was very experienced dealing with all types of behavioral problems. My friend was already working with Tamra, successfully training her dog to be a service dog.

I met Tamra and Gypsy, who is terrified of nearly everyone she meets, immediately trusted Tamra. That gave me confidence in this woman right away. Over the course of several months, we have been working with Gypsy to slowly overcome her fears. It is a long process but one that has proved very rewarding, because of Tamra’s expertise and patience in dealing with a fear reactive dog. I very much like her philosophy of progressing slowly, letting Gypsy do things in her own way, with plenty of positive reinforcement – lots of hot dogs! She never forces Gypsy to do anything she’s uncomfortable with, just gradually persuading her that the world really is not as scary as she thinks.

Since I got Gypsy, I had taken her to obedience classes and met with several “Animal Behaviorists”, whose only recommendations were to either put Gypsy down or to get rid of her, which I was not about to do because she really is an adorable little dog – she’s bright, intelligent and very loving with the right people. Tamra understands all of this and has worked diligently with me, also taking into consideration my lifestyle, to help Gypsy to be more comfortable in her world.

I would recommend Tamra for any type of dog training, whether it be puppy training, obedience classes, behavioral training, help with service dogs, or whatever your dog may need. She is very kind, patient and is absolutely against any type of harsh training – choker collars, prong collars, forcing dogs into submissive behavior, as this only trains the dog to be obedient, but not necessarily to like you or to trust their world!
Margaret Speer, Truth or Consequences, NM